Skip to content
*The following guide contains links to Amazon. As an Amazon Associate I earn from qualifying purchases.

Anyone who has been cleaning guns since their first pot shooter will probably tell you that using a bit of WD-40 to clean your weapon isn’t going to cause any immediate harm.  Afterall it does seem to act in the same way most gun lubrication oils do.

WD does stand for water displacement. So why do so many people say using WD-40 to clean your firearm is a bad idea? 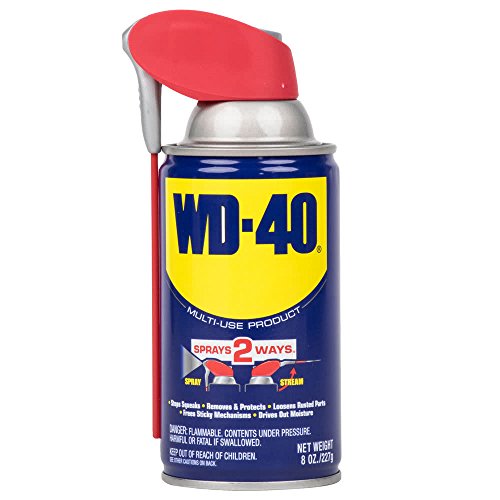 WD-40 has been around for 60 years, and it will probably be impossible for anyone in a 1st or possibly even 2nd world country not to have heard of or know someone who owns a bottle of WD.

WD-40 is like mans best friend. From cars to boats, to rusty tools and everything in between there almost isn’t anything a few sprays of WD can’t fix. According to some urban myths, even a broken heart.

WD-40 can be used for many different things which are technically beneficial to gun owners. It drives out moisture, which is what we want when we are putting our guns into storage or after a shoot.

It has been designed to protect metal surfaces by protecting them from moisture and other particles in the air which could bond to the metal and cause rusting.

Rust stands no chance against WD-40 as I am sure most of you would have used it at one time or another to loosen a rusty bolt or clean off a rusty wrench. It works excellent are breaking bonds between rust and moving mechanical parts like trigger mechanisms.

WD-40 dissolves adhesives and corrosives which is useful for firing residue and grease. Last but not least, WD can be used to lubricate moving parts after cleaning to stop any further moisture sticking to your gun.

Why did people start to use WD40 on their firearms?

If you are old enough to have been shooting since the early days then you will know back then there weren’t many gun cleaning products around. There wasn’t a wide choice, and there certainly weren’t many available in a spray can.

So, when WD came along, naturally it was adopted into the gun community as a savior. The main reason being is that there wasn’t much choice around at the time and it did a good enough job until that is, gun specific oil became more mainstream, affordable and more companies started to develop it.

Why you shouldn’t use WD-40 on guns

So, with those points in mind about ‘what can WD-40 do for a gun’ the truth is WD isn’t designed for use on guns. There is no recommendation from the company or from most people to use it for weapons, and there are a few reasons why.

You would assume that with WD being a lubricant, it would leave some oily residue on the surface of your weapon to lubricate and protect it. You would be wrong. WD40 is designed to evaporate of surfaces. As it drives out moisture, it does little to oil a surface but sits on top of the surface to protect it.

This isn’t good as you will likely be causing your gun to overheat when shooting. The other reason being is a nice coating of oil keeps your parts moving smoothly and protects guns in storage. Using WD good cause more harm than good.

Dry surfaces attract dust no matter what. WD-40 will attract dust and allow it to sit on top of its layer of protection. This dust can build and grow into gunk and other horrible residues we don’t want on our weapons. Couple this the dry environment and it could cause your parts to move slower or stick.

When doing cleaning, use a gun mat to help with that issue. Here are the best ones.

Overall WD40 isn’t the best choice when cleaning your gun. You are far better of choosing a product which was designed to work with the materials, movement, and requirements your firearm needs to keep it clean.

Use a solvent to remove any residue and break down any grime or carbon deposits first. They are specially made to attack residue that builds up from shooting and being in firing environments.

Once your gun is clean use a lubricating oil like Hoppe’s to protect your weapon from future damage, it will also stop any further contaminants sticking to your gun while protecting it from the weather and keeping it safe through storage.

If you struggle with time, then invest in a good CLP. It will do all of the above and you won’t have to worry about losing efficiency in your weapon. You can also check how often to clean your gun.

Scroll back to top